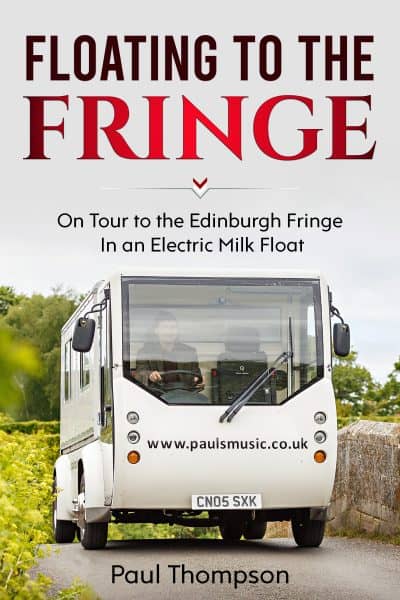 Floating to the Fringe: On Tour to the Edinburgh Fringe in an Electric Milk Float

Gazing out of his cottage window one day at the “Slow You Down” sign in the Norfolk village where he lives, singer-songwriter Paul Thompson comes up with a cunning plan to promote his latest album. Buy an electric milk float, and do a tour to the Edinburgh Fringe, driving the most beautiful B-Roads in Britain along the way.

Despite being told by the director of a dairy that, “It will be a bloody miracle if you make it back in one piece,” Paul convinces Arts Council England to fund his mad-cap idea, and converts a milk float that he names “Bluebell” into a tour bus, and solar-powered outdoor music stage.

Traveling at an average speed of 15mph, 30 miles per day, Paul takes the slow roads to the Edinburgh Fringe, island-hopping along the west coast of Scotland, stopping to play gigs at village halls, nature reserves, music festivals, pubs, and in fact just about anywhere that will get Bluebell charged up for the next leg of the journey.

But life on the road proves to be harder than Paul anticipated. It turns out that Bluebell is allergic to hills, especially steep ones, and there are a lot of those in Scotland! Overcoming breakdowns and exhaustion, Paul discovers the kindness of strangers in the most unlikely places, and comes to realize just how special the British Isles truly are.

As finances start to run low, and Bluebell’s ancient batteries begin to fade, will Paul complete the mission he’s set out on? After all, there’s a Guinness World Record at stake, and this might be the only chance Paul and Bluebell get to break it . . .