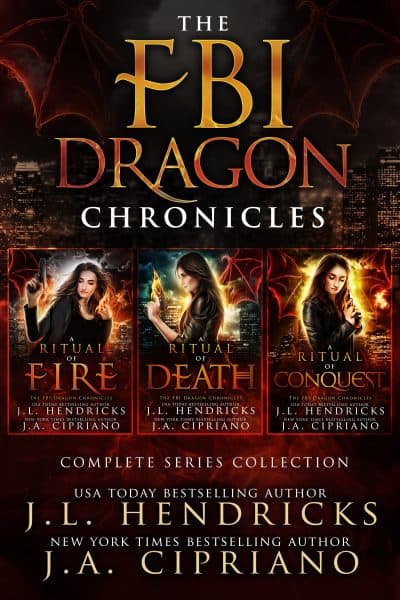 Find out the secret darker than her dragon shifter form . . .

Grab the entire series in one complete boxed set!

A Ritual of Fire
In the first novel in The FBI Dragon Chronicles, Alyson Andrews’s Investigation of a gruesome serial murder sends her into the darkest depths of the city’s magical underbelly . . .

As the last known dragon shifter, Alyson knows firsthand how dark black magic can be.
So when she and her vampire partner come under attack, she knows she has to put an end to the sacrificial murders.

But where there’s magic, there’s bound to be powerful witches.

And they’re the only ones who can detect the truth of her identity . . .

A Ritual of Death
When Alyson, top-flight FBI agent and the world’s last dragon shifter, and her vampire partner Vlad saved the world last month, they thought that would be the last apocalypse they would ever have to deal with. Not only did Alyson find out that she isn’t the last dragon in the world, but a fresh ritualistic murder sends the pair on a death-defying investigation overseas to Russia, and right into Vlad’s dark pastWith enemies on all sides and no support from the FBI, Alyson and Vlad need to crack the case before not only are they taken out, but the entire race of vampires is wiped from the planet!

A Ritual of Conquest
When Alyson, dragon shifter and FBI special agent, and her sexy vampire partner, Vlad, get back from a death-defying mission to Moscow, they discover that the apocalyptic revelations of their case are only the beginning. Alyson is not the last dragon anymore, and Bravog is working to bring about the end of the world as she knows it. Allied with demonic forces, twisted weres, and corrupted mages, Bravog seems to hold all the cards. But when Alyson realizes her true magical potential and Vlad ascends past his limits, the two just might have a chance to stop Bravog, crack the biggest case of their careers, and save the world!