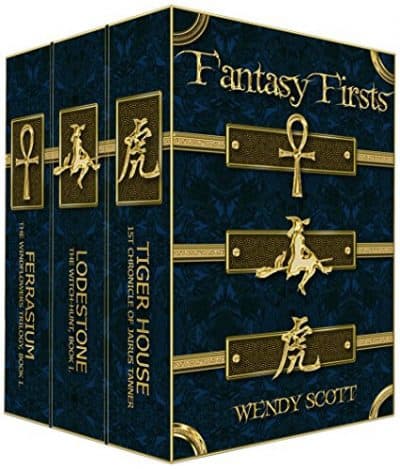 Ferrasium, book 1 of The Windflowers Trilogy.
Murder, mystery, and magic in a land reminiscent of Ancient Egypt.

For centuries, guided by the Destiny’s Oracle, the Bera-Bera tribes have guarded the secret of the windflowers. The High Priest Seraphis covets Pharaoh’s throne and his minions scour the desert sands, seeking two ancient artefacts of unrivaled power. Kalli’s fight for survival begins when the Priesthood uncovers her talent for forbidden magic. Thrust into their killing arena, she’s forced to fight or die. No one has ever escaped from the Ferrasium, but Kalli knows she must or her younger sister will face the same fate. How can a small band of pygmies, a tomb robber, and a magically untrained girl compete against the might of the Priesthood?

Lodestone, book 1 of The Witch-Hunt Series.
There’s a cauldron of trouble brewing in Valloaria . . .
Sabrina and Lauren’s tales entwine—linked by blood and magic. Sabrina, a newly fledged healer, is thrust out of her sheltered life at Mistress Florisah’s healing school after the destruction of the witch-ancestor portraits. An anti-witchcraft militia is poised on Karthalon’s borders, threatening full scale genocide, unless Sabrina, the last of Lauren’s bloodline, can destroy the Lodestone, and restore magic to Valloaria. But the Lodestone is buried deep within the heart of the Order’s headquarters. Sabrina struggles to accept this suicide mission, and is distracted by her inappropriate affection for Micah, a prospect monk.

Lauren’s ghost haunts Sabrina’s dreams as her diary reveals the tragic events behind Lauren’s actions. With invasion imminent, Sabrina embarks on her quest armed only with a sliver of the Lodestone and Lauren’s diary, but how can a lone girl prevail against an army?

Tiger House, book 1 of The First Chronicle of Jairus Tanner.
Betrayed. Kidnapped. A farm boy mistaken for a warrior, Jairus must survive the Emperor’s Games or everyone he loves will be incinerated by the war dragons. Thousands compete for the dragon banner, but in the end there can only be one winner.