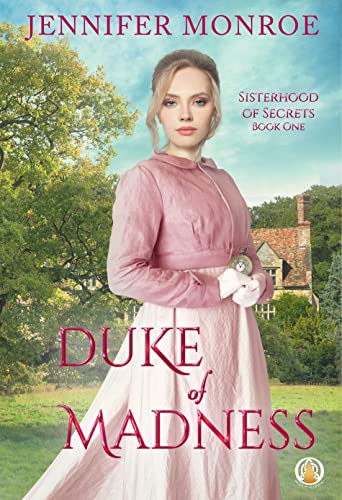 In this opposites-attract Regency romance by Jennifer Monroe, a duke who fears he will become mad like his father and a woman afraid of what the future will hold find themselves in a romance born out of madness.

A duke searching for luck.
A woman looking for love.
And a romance of two opposites that definitely attract.

After watching his parents’ marriage collapse, Matthew Colburn, 5th duke of Elmhurst, has outright dismissed the notion of love. After all, if he is destined to become as mad as his father had been why make any prospective bride suffer? Delving into work to avoid the reality of his future, Matthew focuses on an ever-growing empire, all due to the luck he gleans from a family heirloom—a simple gold pocket watch.

Miss Julia Wallace does not believe in luck, nor any other such absurdities. Fate and personal strength drive what happens in life. Unless one considers her father, who is determined to choose her husband whether love is included or not.

When a reclusive man known as the Duke of Madness comes to her school, Julia is immediately taken by his handsomeness. And when she foolishly collides into his broad chest, he does more than take her breath away—until he accuses her of theft.

Matthew is horrified to learn the very trinket that gives him such wonderful good fortune is missing. He has no doubt that the beautiful young woman used her alluring smile to distract him while picking his pocket. With an important upcoming party and his lucky watch missing, Matthew is at a loss as to what to do. The headmistress of the school insists her pupil is no thief, but rather a woman with a great deal of luck in her own right. Julia will accompany him to the party as a replacement for his missing watch—as his new lucky charm.

As the two become better acquainted, Julia sees not a duke who is on the verge of madness but rather a man who is lost. And Matthew begins to believe love may have a place in his life after all—though he cannot help but think that it may take more than just luck to bring them together.