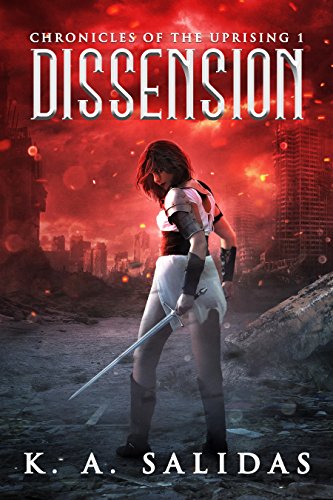 Dissension (Chronicles of the Uprising Book 1)

In the militant society that rose up after a cataclysm, vampires are enslaved and used for blood sport in the gladiatorial arena. There is no greater gladiator than Mira: undefeated, uncompromising . . . and unbreakable. When she has the chance to break free, she takes it.

Everyone joked about the end of the world, but when it finally happened, no one was laughing.

The great cataclysm wiped almost all life from the face of planet Earth, but tiny pockets of survivors crawled from the ashes, with only one thought: survival, at any cost.

But not all of those survivors were human.

In the dark, militant society that rose up in the aftermath, immortal creatures once thought to be mythical have been discovered, assimilated, and enslaved. Used for blood sport in the gladiatorial arena, their lives are allowed to continue only for the entertainment of the human masses.

And there is no greater gladiator than Mira: undefeated, uncompromising . . . and seemingly unbreakable. A proven warrior with a blade as sharp as her tongue, she’s driven to survive by hope the humans have yet to beat out of her.

Now, after thirty years of servitude as a killer behind the Iron Gate, she finally has a chance to break free. But to do so will send her right into the path of Lucian Stavros, the city’s Regent, a human, and the man directly responsible for her people’s enslavement.