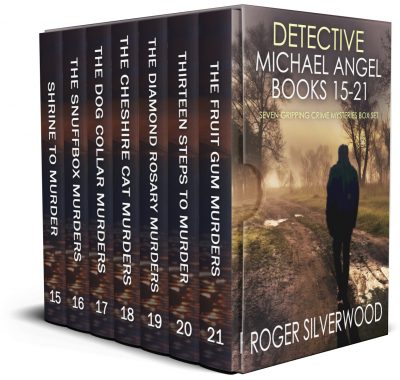 Inspector Angel races against the clock to find the killers in this seven-book boxset. Can he prevent further bloodshed?

Fifty-something Michael Angel is married to Mary. They are a devoted couple but the relationship sometimes breaks down due to his job or Mary’s meddling sister, who lives in Edinburgh and imposes on their easygoing natures. Michael works at the local police station. He is committed to defeating crime, murder, and dishonesty of any sort, but has no personal ambition beyond being a good husband and a successful detective. He doesn’t want promotion with all the bureaucracy and stress that goes with it. He is incorruptible but always short of money. He is always at odds with his immediate chief, Detective Superintendent Horace Harker, a lazy hypochondriac with not the slightest interested in assisting Angel in serious police work.

In this seven-book boxset:

Shrine to Murder
Luke Redman is stabbed to death in his bed. The clues are as sparse as they are puzzling: a character in early Roman dress is observed at every murder and a laurel leaf is left on each corpse. Inspector Angel races against the clock to find the killer. Can he prevent further bloodshed?

The Snuffbox Murders
Inspector Angel and his team are looking for an antiques thief and murderer who tears out the tongue of anyone he fears might give him away. The only link is that they are all interested in acquiring antique gold snuffboxes. Can Angel stop a murderer before he snuffs anyone else out?

The Dog Collar Murders
A ticket clerk is shot dead at the railway station. The murderer was wearing a dog collar and was seen arguing with the victim. Inspector Angel is under pressure, and the investigation becomes even more dangerous as he races to find the killer and prevent more blood being spilled.

The Cheshire Cat Murders
A young man is found dead by the river, with lumps taken out of him by a savage and sharp-toothed predator. A witness sees a big black wild cat running off. It appears that the cougar is under human control and is trained to kill to order. Can Inspector Angel stop any more cat killings before panic takes hold in Yorkshire?

The Diamond Rosary Murders
Inspector Angel investigates the murder of a young girl in the back streets of Bromersley. The victim is thought to be a member of a gang wanted for stealing the priceless diamond and ruby rosary which had belonged to Queen Mary I. But the body disappears before Angel arrives. What’s going on?

Thirteen Steps to Murder
An old man in pyjamas is found dead at the bottom of the stairs. His wheelchair is next to him—was he pushed or did he fall? Inspector Angel is drawn into an intricate web of family lies and deceit. The pressure is on for Angel to unravel the mystery and identify the killer before another body is found.

The Fruit Gum Murders
Inspector Angel and his team rush to a murder scene. The victim is found half-dressed in a hotel room bed. On the floor, Angel finds a red fruit gum. Then another victim is found with a fruit gum by their body. The killer has struck more than once, and Angel is thrown headlong into a world of blackmail and deeply buried family secrets.