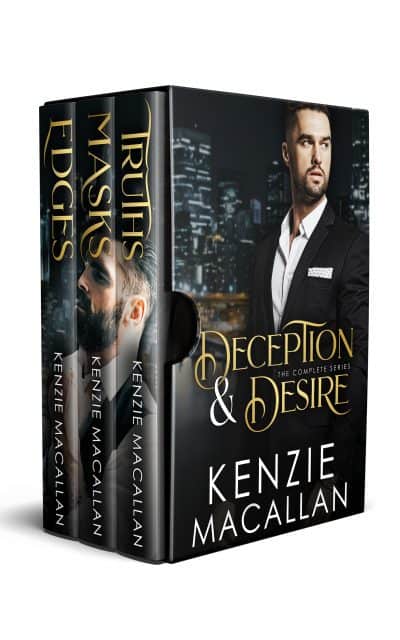 Deception & Desire includes three full-length novels plus a novella with sexy international men, strong heroines, and satisfying HEAs. Each book can be read as a standalone or part of the series. They feature complex mafia plotlines, family twists, and steamy desire.

Mara vacations with her sisters after her husband’s mysterious death. But the last she expects is to be hunted by a killer tied to the mob and falling in love with her rescuer. A steamy action with high-stakes adventure, hot military Scotsman, billionaire playboy, overcoming physical and emotional odds, falling for the hero.

Mara needs her space but when Mac’s brother gets tangled up with the Russian mob, one last secret could break them up. The action continues from Truths with steamy action adventure, Russian mob, and unbreakable bonds.

Leigha’s life is turned upside down when her apartment gets ransacked. But as Dean helps her uncover a dangerous family secret and rescues her from deadly mobsters, she can’t decide whether to pull him close or push him away. An office romance, hot military Aussie, tortured hero, steamy romance with high-stakes adventure with the Russian mob.

Raquelle goes undercover to find her father’s killer. But when clues lead to Misha, a suspicious CEO, she discovers a sinister conspiracy that connects all the pieces from her family’s past. A sexy romance, opposites attract, family scandal, overcoming emotional odds.

Buy the Deception & Desire series to find out all the twists and turns you’ll never see coming!