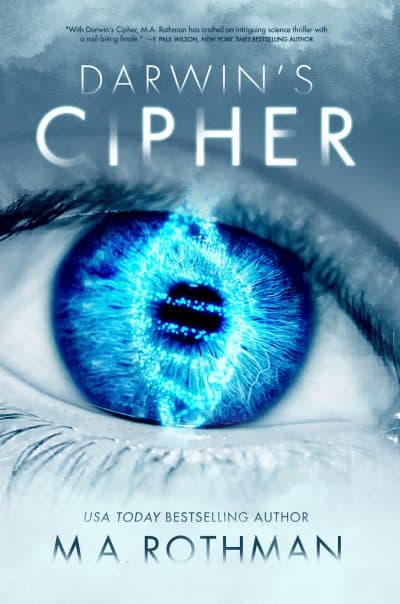 **All proceeds during this sale are going to the American Cancer Society** Juan may have found a cure for cancer—but as FBI forensic analyst Nate breaks down a baffling case, it becomes clear that Juan’s algorithm has fallen into the wrong hands.

Juan Gutierrez, a cancer researcher, has spent years studying the genome of animals that exhibit immunity to some types of cancer. Over the course of his study, Juan discovers a pattern that allows him to predict the course of a species’ evolution across thousands of generations.

Using the algorithm he’s developed from the pattern, Juan uncovers what he believes to be the key to conquering humanity’s susceptibility to cancer.

Others are interested in using what Juan has dubbed “Darwin’s Cipher,” however, instead of cancer research, they see very different applications for the new genetic algorithm.

Nate Carrington, an FBI forensic analyst has been struggling with several cold cases when he’s alerted to an incident at a nearby ranch. It’s a case of a newborn calf who is found in the middle of a herd of dead cattle. It provides a single link to Nate’s other cold cases: the DNA analysis of the calf doesn’t match anything in the FBI’s database.

Somewhere in a rural hospital in West Virginia, four hospital workers are dead and a newborn child has been transported to the NIH’s level-4 bio-containment unit.

It’s only when the NIH sends out an alert to all hospitals and law enforcement agencies that the world realizes the danger that faces them.