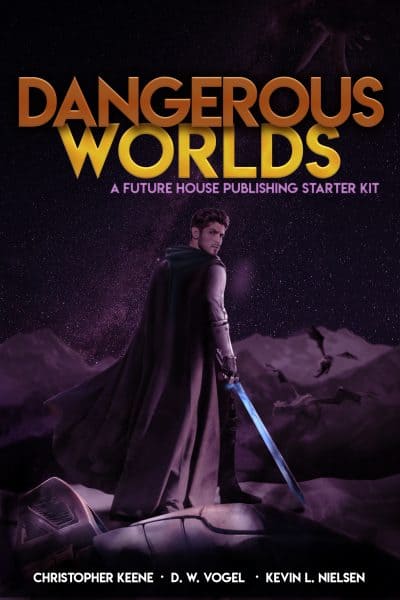 Two hundred years ago, the great Ark Horizon Alpha escaped a doomed Earth and went searching for a new home.

Predators of Eden by D. W. Vogel
“We never would have come here if we’d known.”

Two hundred years ago, the great Ark Horizon Alpha escaped a doomed Earth and went searching for a new home. The passengers landed on Tau Ceti e expecting paradise, but instead they discovered a planet stuck in its own version of the cretaceous period. The humans’ one defense against the dinosaurs ravaging the planet is an electric fence, built from the remains of the shuttles that brought them there.

But Eden base has only days of power left.

With most of the adult men dead, rookie soldier Caleb Wilde and his unit of teenage boys leave the electric fences of Eden in search of a reactor core lost deep in the jungle.

The last remnant of the human race waits behind the electric fence for their return. The dinosaurs wait, too—for the electricity to die and the feast to begin.

Sands by Kevin L. Nielsen
For nine months of the year, the sands of the Sharani Desert are safe. The genesauri—giant, flying, serpentine monsters who hunt across the desert in enormous packs—lie dormant. The smallest of their kind is able to take down a single man with ease, and the largest is able to swallow entire clans. The people of the desert have always been able to predict the creatures’ appearance, but this year, the genesauri have stopped following the rules.

When the genesauri suddenly attack her clan, seventeen-year-old Lhaurel draws a sword in her people’s defense—a forbidden practice for women of any clan—and is sentenced to death by her own people. Chained to a rock and left to be eaten by the next wave of genesauri, Lhaurel is rescued by a mysterious, elusive clan said to curse children at a glance, work unexplainable terrors, and disappear into the sands without a trace.

With the fate of the clans hanging in the balance, Lhaurel discovers she possesses a rare and uncontrollable power—one that will be tested as the next deadly genesauri attack looms on the horizon and the clash between clans grows more inevitable by the hour.

Stuck in the Game - Christopher Keene
Everyone else in the world would love being stuck in the Dream State, but for Noah, it’s the most dangerous place he could be.

Noah promised himself he would never use the world’s most popular MMORPG—The Dream State. He’d already lost too many friends to the addictive virtual world.

But after a devastating car accident leaves Noah paralyzed and his brain injured, he’s been forced into the game. The Dream Engine keeps Noah’s mind alive while doctors frantically work to heal his body, but dying in the game could send Noah into a coma forever.

Meanwhile, Noah’s girlfriend, Sue, is suffering injuries from the same car crash, and the doctors grow confused when she seemingly fails to connect to the game. Then Noah encounters a mysterious avatar who suggests that the last remnants of Sue’s consciousness are being held prisoner in the most dangerous part of the game.

Determined to rescue her, Noah levels up and rises through the ranks, allying with high-level players and unearthing forbidden secrets, including a sinister cover up. Now top players from across the world are hunting him.

Can Noah stay alive—and awake—long enough to save Sue, expose the plot, and escape the game?