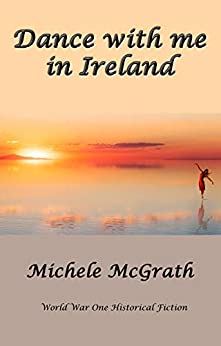 Dance with me in Ireland: World War One Historical Fiction

Mystery, romance, and suspense during World War 1. Emma, Johnny, and Danny fight for survival in the slums of Dublin. Emma loves Rory who enlists in the army. Danny is wounded in the 1916 Rising and Johnny stands trial for murder. Will they live to find happiness?

When their parents are killed in an arson attack, Emma and her younger brother, Johnny, are sent to live with their grandmother in Dublin. Their disgusted Uncle George, who is a police sergeant, tries to establish that they are impostors after their grandmother’s money.

It is April 1914, and Emma finds the changes in her life difficult. She meets Rory, the son of friends, but at first, they are in comfortable with each other and seem to have little in common. When war breaks out, Rory joins the army, against his parents’ wishes, and departs for France. A reporter asks girls to write letters to the soldiers on the front line, to cheer them up. Emma writes to Rory.

She joins the war effort, volunteering to nurse wounded soldiers, although she is untrained. Her elder brother, Danny, is injured in Flanders and sent to Liverpool. She braves the submarines in the Irish Sea and brings him back to Dublin.

Emma’s romance with Rory continues through letters and an unexpected visit home in March 1916, where they realize what they mean to each other. It leaves both of them anxious. Rory could be killed in France and Dublin is seething with marching men.

Danny fights in the Easter Rising and is wounded again. He begs Emma to take him away and hide him before he is arrested.

After visiting him one evening, Emer is attacked by O’Donovan, one of her father’s enemies, but Johnny saves her, unintentionally killing her attacker. The family escape to the Isle of Man where they are safe for a time. Unable to find work, Danny returns to Ireland, where Johnny joins him.

Johnny is identified as O’Donovan’s killer and stands trial for murder. Emma, her friends, and relatives, must free him and help him to escape abroad. Things come to a head when Uncle George kidnaps Emma to force her to disclose her brothers’ whereabouts and violence follows.

Will Emma escape? Will Rory survive the war and return to her? Will they find love after all that has happened?