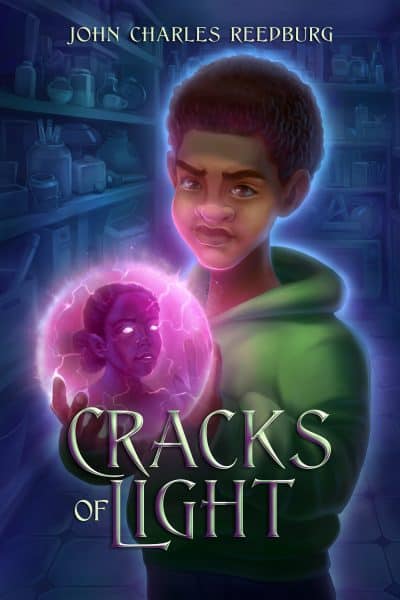 Which would you trust—an abusive human or a comforting orb of light? When a young boy is locked in a dark closet by his mother, he begins his relationship with “The Other Side.”

Growing up in a broken home will always be a rough ride for any child caught in the crossfire. Naturally, when The Light speaks to nine-year-old Demetrius, he is too afraid to tell his bipolar mother what he has seen . . .

However, after young Demetrius develops a secret friendship with The Light, he is taken to “The Other Side,” a metaphysical realm where he meets his ancestors and learns about coping with childhood trauma, domestic abuse, and mental illness.

Acclaimed screenwriter John Charles Reedburg presents his latest novel, Cracks of Light, an urban fantasy horror that fuses drama, poetry, and testimony with the spirit world. This book is the first in a series of novels that center around human relationships with the supernatural and appeals to older fans of young adult fiction and genre readers alike.

“Raw and lyrical, harrowing, funny, and deeply human, Cracks of Light is a spellbinding novel, a riveting meditation on identity and ancestry. Reedburg is a natural born storyteller, vividly moving back and forth from early 90’s South Los Angeles to other dimensions. He confidently takes on a complex plot of mental illness, abuse and addiction, deftly weaving in themes of religion and the supernatural. His voice is a mashup of Stephen King, Walter Mosley, and Charles Dickens, yet distinctly his own, fearlessly telling us Afrofuturist stories that haven’t yet been told.” —Alistair McCartney, author of The Disintegrations.