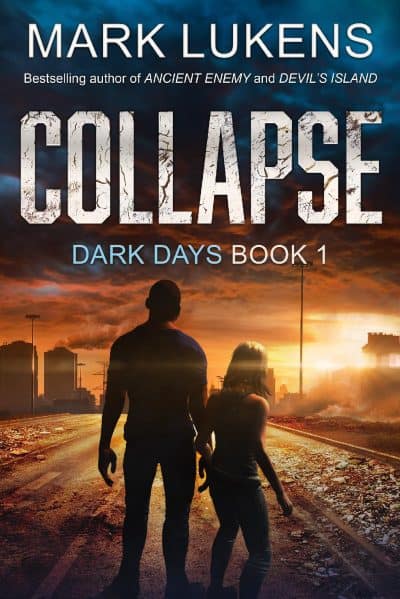 As the Ripper Plague spreads across the world, the darkest days are just beginning.

It started with rumors of a plague that turned people into flesh-eating predators. The governments of the world and the media tried to suppress it, but little by little the truth got out. The economy had been in a free-fall, banks closed, protests turned into riots, people began hoarding and panicking. And then on a Friday morning, the collapse came.

After the government office where Ray Daniels works shuts down, he just wants to get home to his wife and kids. On his arduous journey home, Ray gets a phone call from Craig, his supervisor, inviting him and his family to his home where the answers to the collapse and the Ripper Plague are waiting for him, but the call breaks up and Ray only hears the word Avalon.

When Ray gets home to his family, the TV stations have been replaced with a loop of the president of the United States declaring martial law. The electricity and water are shut off soon after that. They hole up in their bedroom for the night—they have no weapons, little food, and no information about why everything collapsed so quickly.

After Ray’s neighbor, Helen, holds a secret meeting to try to fight back against martial law, she asks Ray to help her blind daughter Emma, promising that Emma can help him and his family find the way to Avalon. But what is Avalon, and what does Emma know about it?

Hours later, after soldiers in gas masks take Helen away, Ray has no choice but to flee with his family. Society has crumbled within the last twenty-four hours. Hordes of flesh-eating infected are loose on the streets. The police and military are doing their best to fight back, but they are losing the battle now. The collapse is here, and Ray wants the answers that Craig has, but he must keep his family alive first.