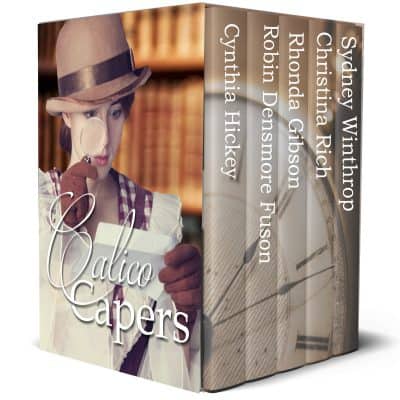 Five historical cozies sure to keep you turning the pages.

Five historical cozies sure to keep you turning the pages.

Hazel’s Quest
Hazel Arnold’s mother has a strong sense of what is proper for a woman of the Arnolds’ financial stature and is determined that Hazel marry a man she despises. This sets Hazel on a quest to prove that the man is not who he appears to be. She enlists the help of her family’s handsome chauffeur and her lady’s maid.

Her search takes her along a path of lies and deceit, resulting in death and destruction. Still, at the end of her quest, Hazel finds something worth much more than proving her mother wrong.

The Dress Shop
When her father is killed in a train crash, twenty-one-year-old Marian Jamison is left to care for herself and her mother. She admires Thomas Hawthorn, who enters her life by design. Mysterious occurrences and a voice in the night make Marian question her mother’s sanity. She is left not knowing whom to trust, including her own heart. Love and intrigue are woven into an intricate design, fitting perfectly inside the walls of her dress shop, but a loose thread could unravel her entire world.

Millicent’s Mistake
Millicent English knew it was a bad idea to go to the Stallman Christmas ball but she also knew she wanted to see Tyler Stallman one more time before forced into a loveless marriage by the banker Sloan Lockhart.

Tyler Stallman has loved Millicent for as long as he can remember but doesn’t understand why she won’t marry him. He knows she loves him too but something or someone is holding her back.

When Sloan ends up dead, all eyes turn to Millicent since she is the one holding the dead man’s watch.

Will Millicent be able to prove her innocence? Or will she end up hanging from a tree long before Christmas?

An Unlikely Governess
Bernadette Chambers has one last assignment before graduating Harris-Spotchnet’s Finishing School of the Peculiar Kind, and unfortunately, she’ll need more than her training has prepared her for when it comes to being a governess to a small child who witnessed her father’s kidnapping. But her lack of preparedness with the child is nothing compared to the sparks ignited by the child’s uncle and his desperate desire to keep his niece safe.

Retired Society Agent Isaac Clanton Willoughby knew his brother was on the verge of a scientific breakthrough to cure a disease that took his late wife when he disappeared days before the cure was to be unveiled at Andropogon’s Worlds Fair. Now it’s up to him to discern his brother’s secret codes, find out who took him, and ensure his niece’s well-being by hiring the perfect governess without becoming distracted by her beauty and intelligence. But when he discovers nothing is as it seems, can he push past his reservations and trust the woman to help him unravel the mystery left by his brother before it is too late?

The Calico Cow Caper
Bruce Douglas is finding a dead cow a week—with the heart removed—in the mountains of his Kohala ranch. Is this a bizarre homage to long dead King Kamehameha, or something closer to home? Private eye Daisy Williams travels to Hawaii to help her sister and brother-in-law solve the mystery.

When another cow is taken, the entire ranch races out to hunt down the rustlers. Daisy, the last to leave, gets lost and is captured. Will they find her body with her heart removed, too?