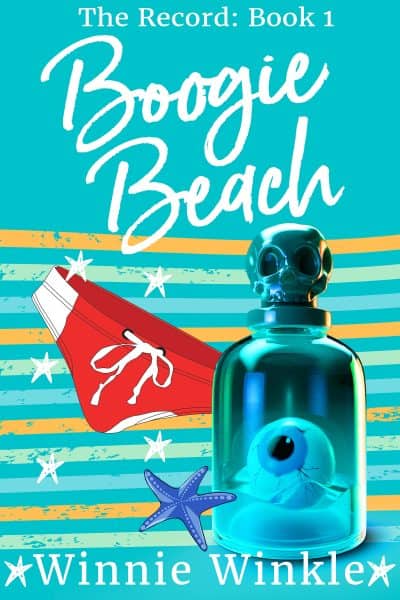 After a hard day of magic, they drink at my bar. Greek gods, shifters, witches, and a herd of fairies ready to party. Everything’s a groove until the one entity feared by gods and magicals appeared. Poseidon showed up for the fight in a speedo. It’s a weird life.

Two bars, one magical and one human, lie in the exact same space. That should work. It’d better; I run those joints and we’re under attack.

I live a pretty weird life—as in gods in speedos, powerful witches with little patience for mere humans, and shifters whose vibrations make my guts quake. Plus, an oceanside bar and a magical book run my existence.

Beach life and eccentric are besties. The record picked me, Cleopatra O’Keefe, to be the next Keeper. I took over the book and started chronicling the intersection and occasional asininity of the human and magical worlds. That’s when eccentric plunked its butt on the deck next to mine and we careened into the world of funky oddities seasoned with occasional mayhem.

I’ve juggled the two worlds for almost twenty years, but my pier is under attack from the one entity feared by gods and magicals alike. Between slinging drinks, writing the history, and trying to keep the worlds in balance, I’m discovering that the Keeper’s job has way more depth than the magicals told me. Who’s lying? Which bits are truth?

I’m at a crossroads and it’s time to make a choice. Toe the line and live, or save the world and die?