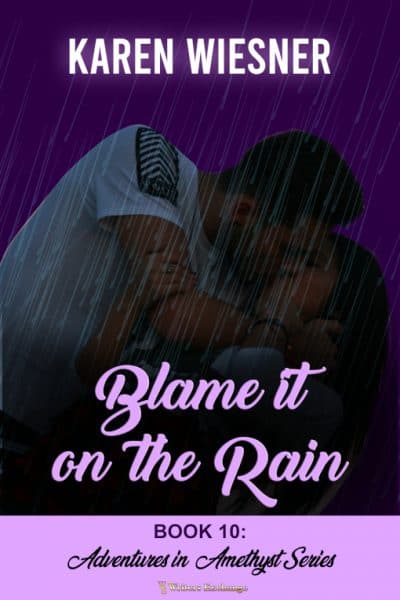 Blame it on the Rain (Adventures in Amethyst Book 10)

Amethyst, WI is a small, peaceful town on a pristine lake with an active tourist season in summer. When the air turns chill, the area is transformed into a ghost town with only a handful of lifers who stay. Amethyst is bursting with mystery, romance, and jealousy all-year-round.

Talise “Tally” Johnson is the second youngest in a family of nine siblings, having grown up a lifer in the small town of Amethyst, where thousands of tourists flock in summer. Once the tourist season is over, the remaining residents do anything and everything to get through the long, hard winters. Tally’s family owns Johnson Resort. Tally has managed to cultivate her job there to include professionally cleaning businesses all around the area throughout the year. Like most Amethyst lifers, she can’t imagine ever moving, but Amethyst isn’t exactly a hotbed for excitement. She and handsome bad boy Adam Schaefer have been an item since high school. Against all odds and despite being a reckless youth always in trouble, Adam is one of the few born and bred in Amethyst who have managed to get out into the big, wide world. As a pilot for a large commercial airline, he’s barely home two weeks out of every year. Tally and Adam’s informal engagement has stretched out into years and, seeing the happy couples getting engaged, married and starting families all around her, she begins to wonder if he’s serious or simply sees her as a convenient stop on the never-ending tour of his life.

Donnie Garner’s best friend Adam is easy to admire. Though they grew up together and got in the same fracas as boys, Adam has made something of himself. Donnie still lives in Amethyst, still works in his dad’s vehicle repair shop with no other career aspirations, still loves the same girl he spent most of his teenage years obsessed with though she’s happily married with kids. Donnie finds himself longing to experience the kind of loyalty and crazy-love with a soulmate that he also sees all around him. For once in his life, he’d like to be the hero in some amazing woman’s life.
Donnie isn’t blind to the shoddy way Adam treats beautiful and sweet Tally, cheating on her without remorse and bragging to him about it, while Tally carries on believing the best of him and his future intentions toward her. Almost unconsciously, Donnie finds himself in love with his best friend’s girl and trying to make her see she’d be better off without Adam–maybe even better off with him. But, even when Tally falls in love with Donnie instead, she can’t easily turn away from the father of the child she never expected to be carrying . . .