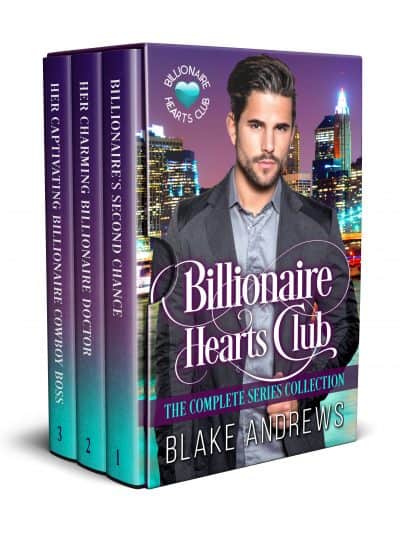 Billionaire’s Second Chance
Ashton Miller is a billionaire with a successful investment firm in New York City. He gets a call from his parents, letting him know that his childhood dog Skipper is sick and will probably need to be put down. He drops everything and flies to his hometown of Meridian, Colorado to spend some time with his old friend and say his last goodbyes.

Becca Chapman is a beautiful young veterinarian who is looking to find some romance after a hard breakup in her youth. Her friends tell her to try online dating, but she doesn’t think that anyone will ever compare with the love she felt from her high school sweetheart. Imagine her shock when that very same person comes into her animal hospital!

Is it possible for things to pick up right where they left off for Ashton and Becca? Is he deserving of a second chance?

Her Charming Billionaire Doctor
Sweet and sincere Sandy Davenport is a performer on a live comedy show who strives to be a success both to herself and in the eyes of the rest of the cast. One night during Memorial Day weekend, the car she’s riding in is rear-ended and she breaks her nose, her wrist, and worst of all, her self-esteem.

Craig Lucas is a rich and talented plastic surgeon in New York—who also happens to be in the car that plows into Sandy’s cab. His brother Donnie was behind the wheel, and he doesn’t spare much thought for the people he hit, but Craig immediately feels remorse and seeks to make things right for Sandy. He visits her at the hospital and offers his services to help her nose not only work again, but look like it used to. At first, Sandy is hesitant to trust one of the men who caused her pain, but Craig’s charm quickly works its magic and she decides to take him up on his offer to perform her surgery.

When they meet on the day of the surgery, Craig is instantly taken by Sandy’s sharp wit and sense of humor and yearns to get to know her outside of the office.Will Sandy ever be able to forgive Craig for being part of the accident that nearly ended her career? Or will his warmth, generosity and kindness be just the medicine she needs to heal all of her wounds?

Her Captivating Billionaire Cowboy Boss
Doug Crofton is the proud owner of a beautiful dude ranch in San Antonio, Texas. He works there with his mother and his aunt, and together they’ve turned a profitable ranch into an extremely lucrative resort for tourists. Stony Creek Ranch is now one of the hottest spots for weddings in the state. There’s just one problem . . . Doug’s mother and aunt cannot work together anymore without feuding. After his mother suffers a health scare, he decides enough is enough and puts out an ad for a new special events coordinator, along with a few other much-needed roles.

Enter hopeful and earnest Paige Lancaster. She works as a freelance event coordinator and she longs for a full-time job somewhere, anywhere. Working a desk job is just not her passion, so when she sees Doug’s want ad, she can’t pass up the chance. During her interview with Doug, Paige feels sparks begin to fly, but she must keep her cool if she wants to land her ultimate dream job.

Doug immediately sees that Paige is the perfect fit for the ranch and is exactly the kind of woman he needs to take charge and bring a long needed balance to his business and hires her right away. As they begin to work together, he’s quickly drawn to her talent, charm, and beauty and longs to ask her out. But will doing so threaten the balance that is beginning to blossom between his family at his beloved ranch? Will Paige take a chance on a billionaire cowboy, even though he’s her boss?