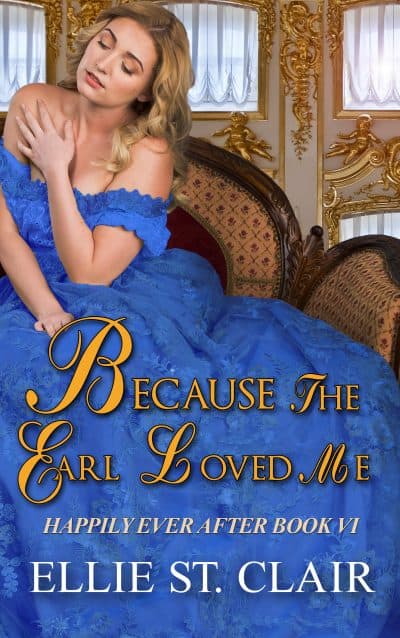 Because the Earl Loved Me (Happily Ever After Book 6)

Adventurous Lady Anne Finchley finds herself falling for the practical Earl of Merryweather—the man she once rejected. Everything is telling them they are wrong for one another—but then why does being together feel so right?

Known by all as a beauty with a haunting, hypnotic voice, Anne Finchley has always longed for more than marriage to a nobleman. She dreams of gracing the stage as an actress, an occupation unheard of for the daughter of a duke. But a chance meeting at a country theatre changes her fate forever.

The Earl of Merryweather, Christopher Anderson, pre-determines every moment of his life, carefully calculating every decision—including marriage to the sister of the Duke of Breckenridge. When he begins his courtship, however, everything goes awry, as nothing about her fits his expectations.

A shocking incident changes everything . . .

When Anne suffers an accident and must rely on Christopher for help, she turns his life upside down. Despite his inflexible ways, Anne finds herself falling for the man she once rejected, but now it may be too late, as the resulting scandal and upheaval may prove to be too much for Christopher to overcome. Everything is telling them they are wrong for one another—but then why does being together feel so right?