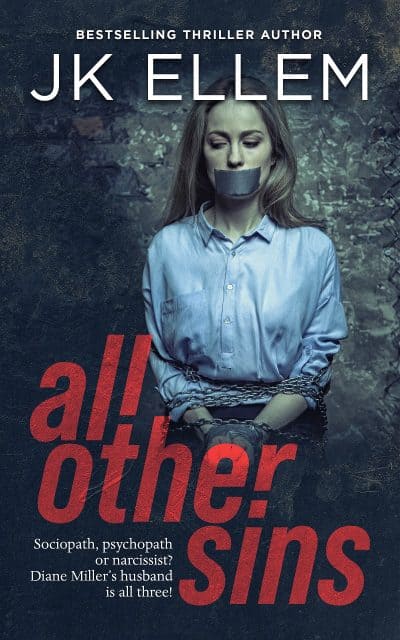 All Other Sins: A mystery and suspense stand alone crime thriller

Sociopath, psychopath, or narcissist? Diane Miller is having a hard time figuring out which one her husband is. The problem is . . . he’s all three!

She did have the perfect daughter once…But now she’s gone.

For the last fifteen years, Diane has learnt to accept her imperfect life, to tolerate her cheating husband and her low self-esteem—that is until she finds a bag full of cash on the side of the road. Now Diane has the means to escape, to start again, to reinvent herself and her life on her own terms.

When she decides to take the money and run, it’s not just her enraged husband who she’s now running from. The people whose money she has taken want to find her as well, and this simple, ordinary housewife from Nebraska soon finds herself thrown into a dark, sinister world of crime and misery that she never knew existed.

Alex Romano, is the Harvard educated, Consigliere of the Romano crime family from New Jersey. As her father’s only daughter and most trusted advisor, she wields significant influence within the family hierarchy. For the last few years, she has been trying to reform the family, legitimize its business interests, reshape its future away from the criminal legacy that was forged through a history of blood and violence.

But such influence doesn’t extend to her older brother, Vincent Romano, the heir apparent, whose raw ambition and brutal methods Alex has trouble controlling. Vincent wants to steer the family back to the old, heavy-handed ways of the past.

Thrown together, sister and brother are tasked with tracking down the missing money. Not only must Alex contend with Vincent’s growing ambitions, she must also watch her back as she navigates family politics, old alliances and new enemies.

And for Diane Miller to survive, she needs to become the person she knew she always could be, if given another chance—and if she can live long enough.

Two women, from two distinctly different backgrounds, on one path of collision.