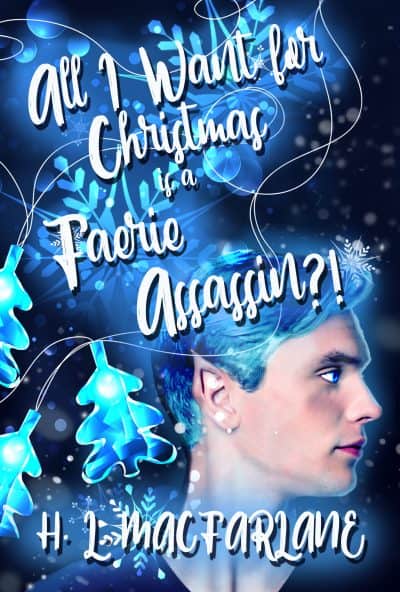 All I Want for Christmas is a Faerie Assassin?!: A Modern, Festive Fairy Tale

If you like: Fake boyfriends, hate to love, swear-happy faerie assassins, Bridget Jones, Christmas, and just a little bit of angst thrown in with your comedy, then you’ll love All I Want for Christmas is a Faerie Assassin?!

Charlotte Connors’ run of bad luck with men has become the running joke of her friends and co-workers. With a looming family function at Christmas and a glitzy New Year’s Eve party that she’s expected to attend, she is determined not to be single over the holiday period for the eighth year running.

Desperate and just a little drunk, Charlotte foolishly decides to summon a faerie to act as her plus one using a ritual described in one of her grandmother’s old books. Never expecting it to work, Charlotte is beyond surprised when a hungover, irritable faerie named Bain shows up . . . and asks her who it is he needs to kill.

Bain is an assassin from the faerie realm with a bit of a foul mouth. Having looked forward to a long, restful sleep after a week of partying at the winter solstice revel, he is less than pleased to discover he’s been sent to answer Charlotte’s pathetic plea. But, by law, Charlotte has to give Bain something in return if he agrees to help her, and he just so happens to have some unfinished business in the human realm he’s waited years to deal with . . .

Hijinks ensue and a reluctant romance blossoms between the unlikely pair as they learn more about each other, culminating in a wild New Year’s Eve party in which lives—and love—may be lost forever.

Funny, sexy and just a little bit magical, All I Want for Christmas is a Faerie Assassin is H. L. Macfarlane’s first foray into festive rom-com territory. It should come as no surprise that it’s also a fairy tale . . . think Bridget Jones meets a foul-mouthed, sarcastic supernatural being and you’re on the right track.