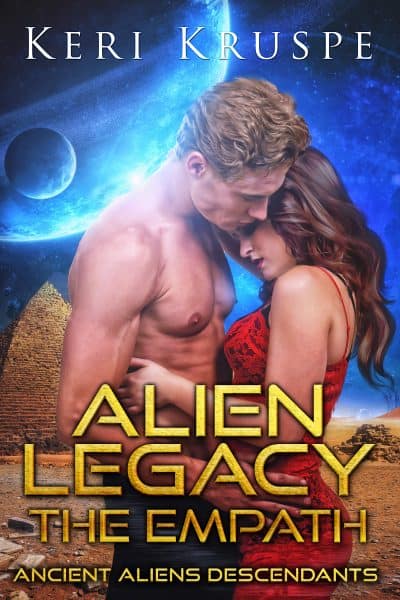 Alien Legacy: The Empath is the first installment in a steamy, adventurous SciFi Romance series. Thrown together by chance, can they trust their unlikely attraction to save us all?

The aliens we thought were long gone are coming back.

Just his luck, alien-hybrid Ben Duncan is the only one for the job. Being an empath and a financial wizard, he’s called in to find an essential ally as well as thwarting a plot his alien ancestors, the Akurns, appear to have started at a small regional bank in Vegas. If successful, the alien scheme to crash the global economy will weaken mankind and make humans ripe for their invasion in less than five short months. He arrives in Vegas as a covert consultant and meets the intriguing Julienne. Instantly he’s alarmed at the intense attraction he feels for her.

It’s an internal struggle between luxuriating in his urge to be with the delectable woman and staying as far away from her as possible. The lives of billions don’t leave time for anything personal.

As senior vice-president, Julienne King leads a stressful life, immersed in organizing a huge merger for a local bank in Vegas. And meeting some arrogant, hotter-than-hell, aloof outside consultant isn’t helping. When she stumbles on an insidious money laundering scheme that threatens the global economy, she’s kidnapped by one of her hateful bosses. Unless she confesses who she’s working with, fretting about a demanding professional life is the last thing she should worry about. Especially when she finds out she may not be who or what she thought she was.

Now it’s a race against time. Can a banker and an alien-hybrid overcome their prejudices and not only work together, but learn their love is the key to mankind’s salvation?