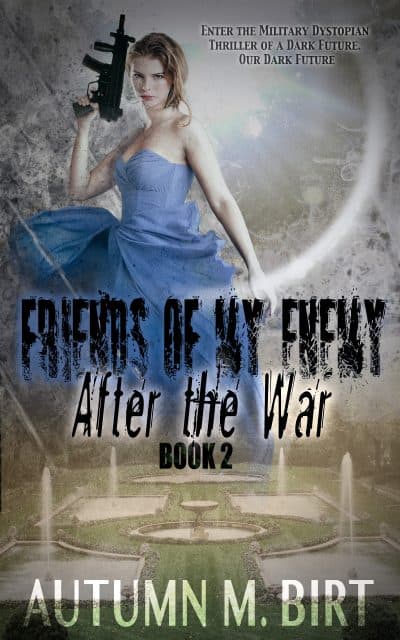 After the War (Friends of my Enemy Book 2)

How do you plot the downfall of a popular wartime heroine—a woman who controls the armed forces? One dent at a time . . .

How do you remove a war hero from power?

Known as the Lady Grey, her leadership won the apocalyptic war that ravaged Europe. But now in 2068 and three years into the official peace, the alliance she’s maintained with the seven ministers who rule Europe falters under the lack of an external threat. They want back the power she claimed in a bid to protect the continent during the conflict; an authority they never authorized. With no war or terrorism, she is no longer needed, even if she safeguards the borders from a threat that is hiding more than is dead.

But how do you plot the downfall of a popular wartime heroine—a woman who controls the armed forces? One dent at a time . . .

Continue the military dystopian series Friends of my Enemy with book 2, After the War. After the War can be read without reading book 1, Stories from the War, so join the near future thriller now!

Set in Europe, this near future fiction series of novels unfolds through the intersecting lives of a small handful of people and explores adult themes, both dark and hopeful, of friendship, romance, family, lust, and sex, including how these influences direct everyday choices which ripple outwards to impact governments caught in a post apocalypse. Because not all influence is good, and not all decisions can be made in time.

Readers are calling After the War “a superb novel” and “Jane Austen meets World War III!”