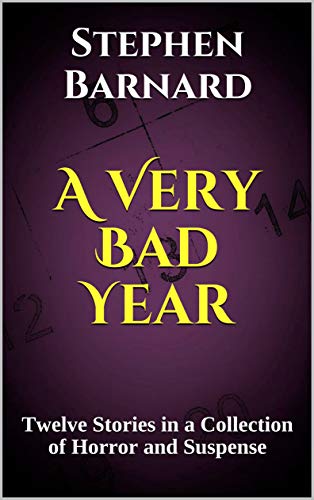 A Very Bad Year: Twelve Stories in a Collection of Horror and Suspense

Taking the calendar as inspiration, here are twelve suspenseful tales—one for each month of the year. A difficult resolution, an unconventional Valentine’s, a challenging Easter, a non-traditional May Day, and so on . . . each with its own little horror.

From the author of ‘Corner House’ and ‘Unlucky Numbers’, a complete collection containing twelve tales of suspense and terror, each one based on a month of the year. Whether you read them in sequence or are drawn to particular months, you’ll never look at a calendar the same way again.

JANUARY: ‘Resolution’ – Marie has decided to try and lose weight, mainly to appease her controlling husband. But as her efforts continue in vain, the side effects become more and more unsettling.

MARCH: ‘Paddy’ – St Patrick drove all the snakes out of Ireland. Now there’s a man in Manchester with serpentine tattoos all over his arms, looking to make some new friends.

APRIL: ‘Under The Bed’ – Warren Slade is extremely house proud. But when things go awry during an Easter party in his back garden, he comes to realise that there are some home improvements that might just be impossible to make…

JULY: ‘Senorita’ – Neil isn’t coping very well on the lads’ holiday to Tenerife, and a day in bed might just be what he needs. But then the maid makes an appearance and gives him something else to think about.

SEPTEMBER: ‘MOG’ – Emily Davis was only doing what most parents did on the first day of school: posting a picture on social media of the children in their new uniforms. The problem is, you can never be sure who is watching, and what they want to share with you . . .

DECEMBER: ‘The Last Present’ – It’s Christmas lunch at the Seymour house, and Declan is meeting Holly’s parents for the first time. They’re worlds apart in terms of wealth and class, and Dec is right to be a little nervous. But not in the ways he imagined . . .

ONLINE PRAISE FOR ‘A VERY BAD YEAR’:
‘Every story is so different . . . keeps you wondering what the author will come up with next.’
‘Good storylines . . . very believable situations.’
‘Really captivating and very special.’