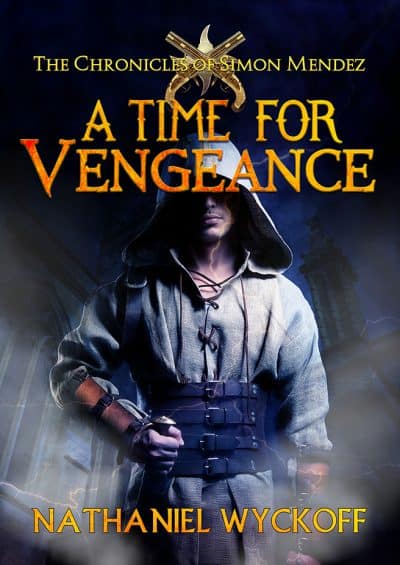 A Time for Vengeance (The Chronicles of Simon Mendez Book 1)

One night, Simon’s father is arrested for teaching Jewish tradition to others. Incensed, Simon makes plans to save his father. He’s ready to retaliate with everything he’s got, to rescue his father from being burned at the stake.

Most people fear the Spanish Inquisition. Simon Mendez will make the Inquisition fear him.

Pretending to be Catholic, the Mendez family secretly practices their Jewish faith. Their trick works until the Inquisition captures Simon’s father and sentences him to death.

Outraged, 17-year-old Simon is determined to rescue his father before he’s burned at the stake. To do it, he’ll have to take on the overwhelming power of the Inquisition.

Simon’s sure he’s got what it takes. From his secret base in the forest, Simon will strike back hard against the Inquisition’s troops and their allies. He’ll use whatever weapons he has to protect his family.

But at night, he is haunted by dreams of a holy ancestor, who urges him to seek a different kind of revenge—physical violence may not be the best way to fight back.

The Inquisition’s informants and allies are everywhere. Everybody is after Simon, eager to see both him and his father burn. It’s only a matter of time before the Inquisition tracks him down.

Join Simon Mendez in an epic battle that will grip you until the very end.