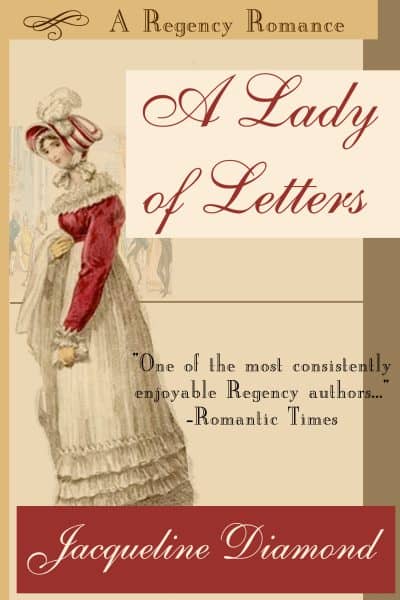 A Lady of Letters: A Regency Romance

This Regency lady has a dangerous secret. Marianne defies a powerful lord to seek a Season in London and join its literary circles. But with her parents accused of spying for Napoleon, will she find love or disaster? By a USA Today bestselling author.

This Regency lady has a dangerous secret.

It isn’t Marianne Arnet’s fault that her parents are reputed to be spies for Napoleon and have fled England. Now the handsome and powerful Lord Whitestone is threatening to bar her from the upcoming London Season and deny her a longed-for chance to mingle in the literary world.

Lord Whitestone doesn’t realise that Marianne is his secret correspondent, and that he’s already half in love with her. Now she’s determined to come to London, even if that requires employing a disguise.

Soon she must encounter Lord Whitestone face to face. That could lead to love—or to disaster for Marianne and her parents.

A love for the books of Jane Austen drew Jacqueline Diamond to the world of the Regency romance, and her half-dozen novels in the genre have delighted readers for more than thirty years. Jackie has gone on to sell more than a hundred novels from mysteries to medical romances and romantic comedies. A former Associated Press reporter in Los Angeles, Jackie has received a career achievement award from Romantic Times magazine and two finalist placements for the RITA Award.

“Ms. Diamond is one of the most consistently enjoyable Regency authors around.” —Melinda Helfer, Romantic Times