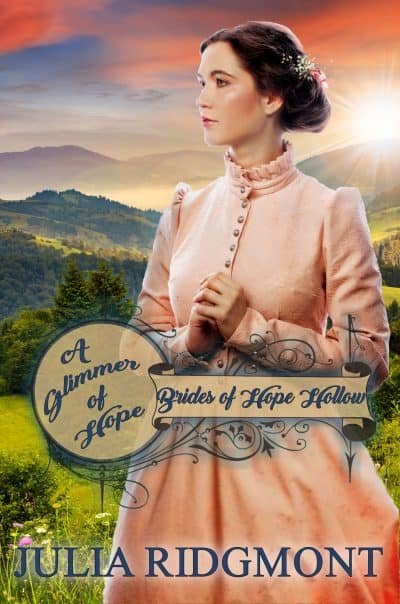 A Glimmer of Hope (Brides of Hope Hollow Book 1)

Melissa Eversoll Burgess’s hope of a wonderful life with her first husband went up in smoke the day she married him. Not only was his abuse difficult to take, but she also learned that he was deeply involved in crime—on the very day he died. Now that they’re both widowed, Melissa and her mother are ready to start over in a place called Hope Hollow. When she is introduced to a handsome farmer and informed that she is to be his mail-order bride, she doesn’t know whether to hug him . . . or slap him.

Garret Pearce came to Oregon three years ago to claim land and nurse a broken heart. Though he’s smitten with Melissa from their very first meeting, he’s not about to fall into that trap again. That is, until it becomes obvious she needs his protection. Entering a marriage of convenience may not have been in his plans, but now that he’s got a wife—and a pretty one at that—he realizes that keeping his heart from being torn in two is going to be the challenge of his life. One that he just might lose.

Will Melissa and Garret get a second chance at love?

Welcome to Hope Hollow, Oregon, a place where hope abounds for the downtrodden and weary, and where peace and love abide amidst life’s trials.

Warning: sensitive topics such as domestic abuse and familial suicide are mentioned as past experiences for Melissa and her mother in the story, though the author has made every effort to keep the focus on the development of the main characters' relationship with each other in this sweet romance.