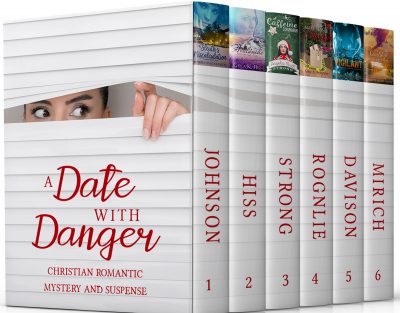 A Date with Danger

The Sleuth’s Miscalculation by Kimberly Rose Johnson
Librarian Nancy Daley loves a good mystery and enjoys moonlighting as a consultant for the sheriff’s department. Sheriff Deputy Carter Malone expects Tipton, Oregon, to be a sleepy small-town, but he miscalculated. When the minor case they are working morphs into something more, things quickly go from harmless to scary. Can these two strong-willed sleuths solve the mystery before it’s too late, and more importantly, what will they do about their growing attraction?

Avalanche by Gayla K Hiss
When Park Ranger Jenny Snowfeather runs into Deputy Marshal Chase Matthews at her brother’s Fourth of July barbecue, she suspects there is more going on in Eagle Valley, WA than fireworks. Realizing the dangerous fugitive Chase is after may be in the area, Jenny risks everything, including her heart, to join Chase on a manhunt in the avalanche-prone backcountry of North Cascades National Park. They must tread carefully—one step in the wrong direction could mean the difference between life and death.

A Caffeine Conundrum by Angela Ruth Strong
Sassy city girl Tandy Brandt moves to a small town to start a coffee shop, never imagining she’ll be competing with local beauty queen Marissa Alexander and her dream of running a tea house. Unfortunately, the current store owner dies before selling the location to either of them, and they both become murder suspects. The unlikely pair team up in an attempt to discover the real killer, though with the secrets in Tandy’s past and Marissa’s infamous clumsiness, they could be their own worst enemies.

Make Haste Slowly by Amy Rognlie
Life in Short Creek, Texas, is just what Callie Erickson expected it to be: calm and predictable . . . until the morning a gift bag—along with a dead body—appear on the doorstep of her shop. A terrible tragedy? Or something more sinister? With the help of her indomitable Aunt Dot and friends old and new, Callie sets out to discover the truth that could change her life forever.

Vigilant by Sara Davison
Nicole Hunter must choose between the man who represents the law and the one who may have taken it into his own hands. When children begin disappearing in the night and Detective Daniel Grey enlists Nicole’s help to investigate the man she loves, she faces her deepest fear. Everything and everyone she has clung to so tightly could be ripped from her, leaving her completely alone.

The Courtship of Harry’s Wife by Jeanette-Marie Mirich
Unassuming Delilah Morgan plans to mourn her husband’s passing in private, but her husband had other ideas. To protect her from the elite of their town, he selected a local judge to court her. However, he neglected to include his wife in his plans.