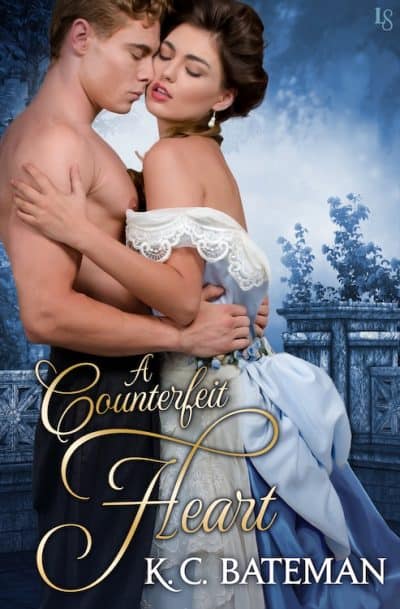 A feisty counterfeiter and a cocky British agent clash in this sultry Secrets and Spies novel by K. C. Bateman, whose witty, intelligent, and sexy historical romances have become her signature.

A feisty counterfeiter and a cocky British agent clash in this sultry Secrets and Spies novel by K. C. Bateman, whose witty, intelligent, and sexy historical romances have become her signature.

As Sabine de la Tour tosses piles of forged banknotes onto a bonfire in a Paris park, she bids a reluctant farewell to her double life as a notorious criminal. Over the course of Napoleon’s reign, her counterfeits destabilized the continent and turned scoundrels into rich men, but now she and her business partner must escape France—or face the guillotine. Her only hope of surviving in England is to strike a deal with the very spy she’s spent her career outrunning. Now after meeting the arrogant operative in the flesh, Sabine longs to throw herself upon his mercy—and into his arms.

Richard Hampden, Viscount Lovell, is prepared to take any risk to safeguard England from the horrors of the French Revolution. To lure the insurgents out from the shadows, he’s even willing to make a pact with his archenemy: Philippe Lacorte, the greatest counterfeiter in Europe. But when a cheeky, gamine-faced beauty proves herself to be Lacorte, Richard is shocked—and more than a little aroused. Unlike the debutantes who so often hurl themselves at him, this cunning minx offers a unique and irresistible challenge. Richard will help her. But in return, he wants something that even Sabine cannot fake.