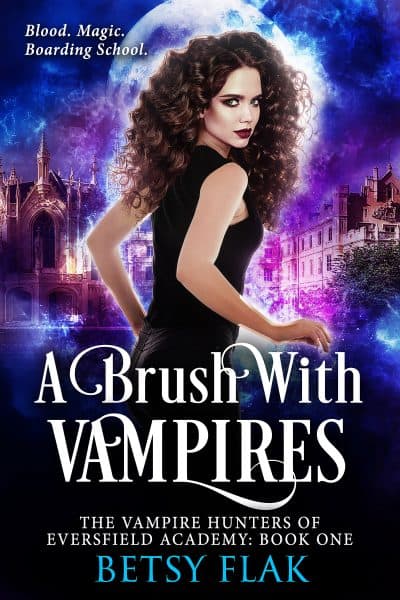 He hunts bloodsuckers. She’s got power like he’s never seen. To keep their school safe, he’ll put his life on the line to protect her. If you like supernatural suspense, coming-of-age drama, and emotional slow-burn romance, then you’ll love Betsy Flak’s page-turner.

He hunts bloodsuckers. She’s got power like he’s never seen. To keep their school safe, he’ll put his life on the line to protect her.

High school sophomore Lila Lee is desperate to fit in at her new boarding school. Surrounded by frenemies, it takes bumping into the gorgeous Gabe to turn her fake smiles into crackling chemistry. But when she sees surprise on the laid back senior’s face, she can’t help but wonder what he’s hiding.

Gabe wants fun and freedom, and he refuses to let his vampire hunting duties get in the way. After his chance meeting with Lila sparks intense visions, he realizes the pretty sophomore could be even more powerful than he is. As Gabe keeps the new girl in the dark, he’s not the only one who notices Lila’s hidden magic.

While Lila tries to climb the popularity ladder and Gabe fulfills his duties, something different lurks in the shadows. Something deadly. Something that could take more than Gabe and Lila’s powers combined to stop from drenching the school in blood.

A Brush with Vampires is the first book in The Vampire Hunters of Eversfield Academy YA paranormal fantasy series. If you like gutsy heroines, dark villains, and intense high school relationships, then you’ll love Betsy Flak’s page-turner.

Perfect for fans of Twilight, Vampire Academy, and The Mortal Instruments series.

Download A Brush with Vampires to drive a stake through high school drama today!