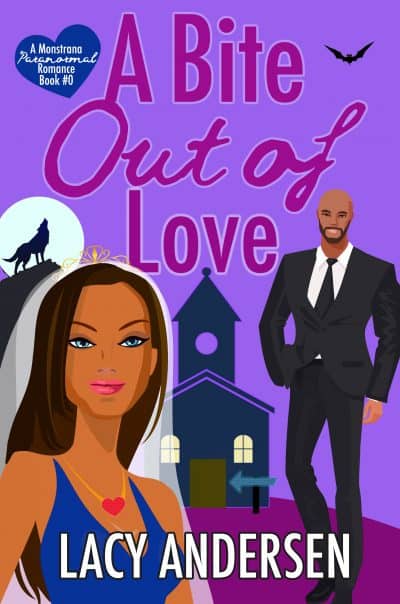 A Bite Out of Love (A Monstrana Paranormal Romance Book 0)

What’s love without a few fleas?

What’s love without a few fleas?

Miranda Nelssen is brand new to the werewolf life. She doesn’t have time for relationships, especially with the fine specimen of a man who has become the target of her new pack leader’s daughter. But when she stumbles into a field of intoxicating flowers and wakes up hours later in bed with a shiny new gold band around her finger, she realizes things are about to get hairy.

Jeremy Washington has a secret that’s been eating him up on the inside. It’s made him super protective of the gorgeous new addition to his pack. When he follows Miranda into the woods and wakes up hours later on the floor of her apartment, it’s clear that his journey to protect her has just taken a turn for the complicated.

Willy fairies, royal vampires, and taxi gnomes may stand in their way, but there’s nothing quite like an accidental marriage to force secrets out into the open.

A Bite Out of Love is a paranormal sweet romance with plenty of spice, humor, and magic. Get lost in the hidden supernatural kingdom of Monstrana today and fall in love with its creatures of the night.

*Novella with no cliff hangers. Hunky werewolves are a promise.