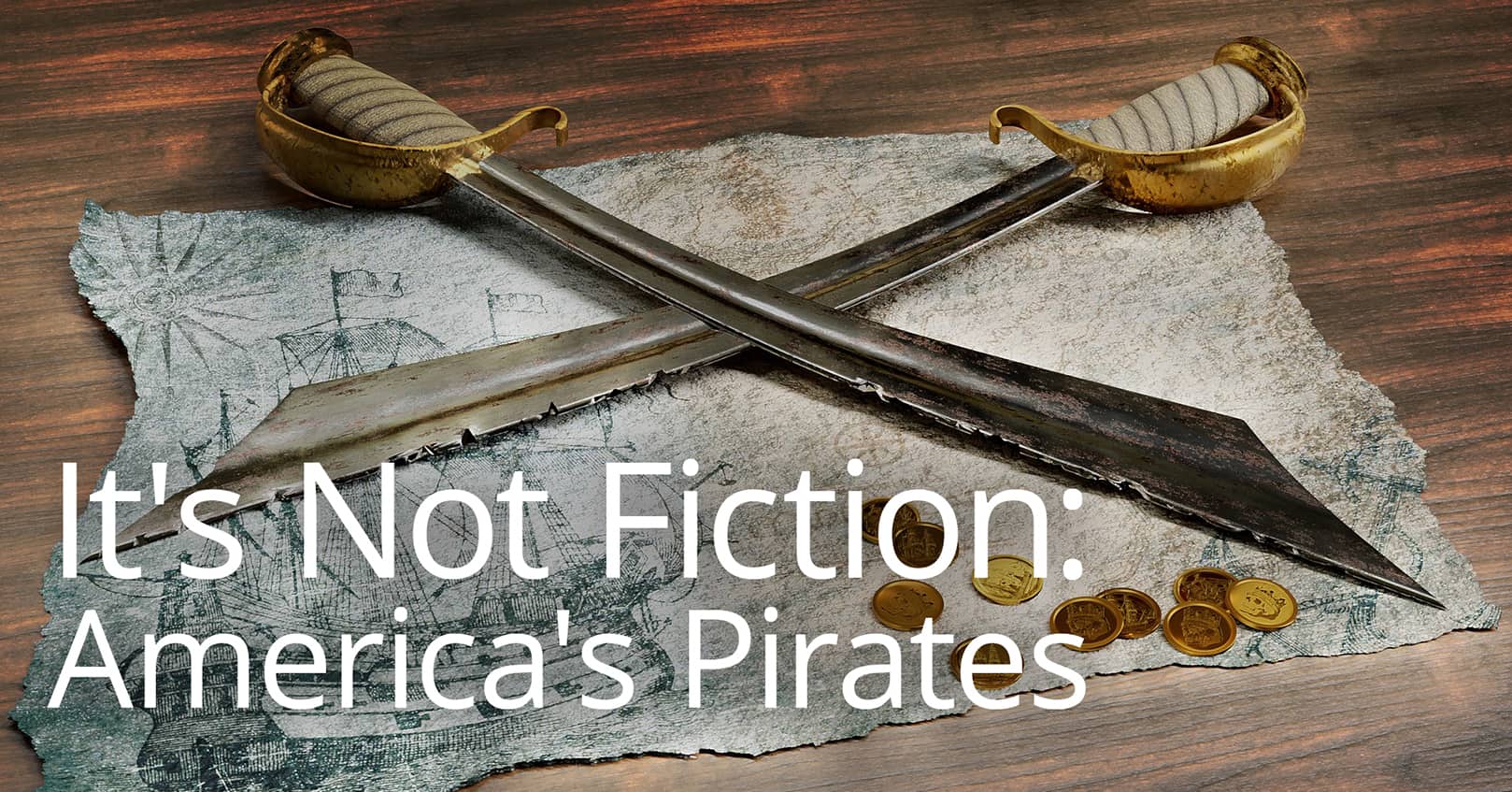 Do you love a good pirate romance? Does it seem like most of them take place during the Golden Age in the Caribbean? One of the fun things about reading historical books is learning about pirates beyond the West Indies. Discovering how they pillaged the Mediterranean, looted Asia under the command of Madame Ching Shih, and even pirated American rivers is another way to enjoy swashbuckling tales.

Pirates who haunted early North America weren’t all from the Caribbean. Although the most notorious came from British stock with headquarters in the West Indies, some of them had different backgrounds—and prey. Here’s just a small sample of the many pirates in America’s past I hope you only ever meet between the pages of a book:

The most infamous pirate of the Americas originally called England home. Edward Teach was known as Blackbeard. This 18th Century pirate is somewhat of a celebrity up the Virginia and Carolina coastlines. His legacy has been romanticized in film, television, literature, and most memorably resurrected in Pirates of the Caribbean: On Stranger Tides.

Ironically, Blackbeard wasn’t an American colonist, but a British naval deserter who preferred the U.S. coastline for his dark doings. Known for gleaming hair and rumored to be nuts enough to light his beard on fire during attacks, he soon became a thorn in the side of the American colonies. Irate and swamped with complaints, the lieutenant governor of Virginia finally ordered a fleet of ships to hunt him down in 1718. Taking cover in a channel near North Carolina’s Ocracoke Island, Blackbeard was smoked out, and a short but violent battle ensued that ended his life. This buccaneer literally lost his head but not his fame. The remains of his flagship, Queen Anne’s Revenge, were discovered off the coast of North Carolina in 1996, and efforts are currently underway to salvage her.

Beautiful Charleston did its part to curb piracy in 1718 when it hung the gentlemen pirate, Stede Bonnet. Born sometime in the 1680s to a reputable English family, Bonnet found success in the army and then as a planter in Barbados. For reasons undetermined, he bought a fast ship, Revenge, in 1717 and turned to pirating. He haunted the American coastline as far as New England, even burning ships from his own island home. During his brief career, Bonnet joined forces with Blackbeard, sought a pardon, and returned to pirating until he was captured by South Carolina’s Captain William Rhett.

Rhett was pirate-hunting another British problem at the time when Bonnet crossed his path. This luckless pirate would no longer be a bee in South Carolina’s bonnet. They hanged him at Charleston harbor’s White Point and buried him below the waterline. You can still see Captain Bonnet’s ghost hanging among the ancient trees at the battery at night—if you dare to visit.

Savannah was the colonial capital of Georgia. It was established in 1733 not long after the peak of piracy’s Golden Age. This coastal city dripping with Spanish moss was a convenient port along the Molasses and Slave triangles as ships ferried enslaved persons, sugar, and rum between Africa, the Caribbean, and the colonies. That made Savannah’s waters prime pickings for pirates. With long stretches of beaches and many deserted cays, it was the perfect port for one to go unnoticed or to disappear.

Savannah was pretty shady and not just from the giant oaks. Its most famous pirate is the fictional Captain Flint, brought to life in Robert Louis Stevenson’s Treasure Island. Today, Savannah still boasts underground pirate tunnels and historic taverns where pirates once roamed. I highly recommend dinner at the haunting Pirate House restaurant if you ever find yourself in town.

You can’t get more fascinating than a pirate with a cause or one who escapes capture and buries his treasure. America had pirate problems long before the Golden Age, and they didn’t all stalk the southeastern seaboard. American colonist, Dixie Bull, arrived in York County, Maine, in the early 1630s when animal pelts were a prime trading commodity. Doing business along the coast with Native Americans and colonists, he was attacked and robbed by a French ship, which provoked him enough to retaliate. Hiring an eager crew, he set out to attack French traders but found that English ships were just as lucrative to pirate. Bold after some success, Dixie Bull attacked and burned the coastal village of Pemaquid but sailed away with fewer men. Four ships made way to capture him, but he escaped and disappeared. Some say he returned home to London. Others say he joined the French. Of course he buried his treasure, legend claims, on a nearby island. Now doesn’t that sound like a great book?

Most people don’t know that early America had a dreadful time with pirates on its inner waterways, too. The Ohio and Mississippi rivers were plagued with them in the 18th century. Today, legendary Cave-in-Rock on the Ohio River is now an Illinois state park, but it was once a hideout for notorious river pirates like Samuel Mason and Colonel Plug.

The American pirate, James Ford, grew up nearby in the western territory of what would become Kentucky. He married well and became a respected community leader, but it didn’t stop him from a secret life of crime. A land and slave owner, he used his brother’s ferry connections to round up a crew to pillage boats on the river beginning sometime around 1800. The pirates also kidnapped free or fleeing men of color and sold them back into slavery. Infamous due to his pretenses of civic honor and duty, Ford was truly cruel and greedy. He operated around the same time as Samuel Mason from the Cave-in-Rock gang, but his connections did him no good. Ford was murdered by his own crew in 1833.

Oh my goodness, what a name. But this isn’t a true pirate ensemble without a nod to at least one female American pirate. Sadie Farrell was a violent but clever pirate lady who entered the history books centuries after our first celebrated buccaneers. Her birth details are unknown, but Sadie popped up in New York City sometime after the American Civil War. A street thief, “Sadie the Goat” liked to plow headfirst into the stomachs of her targets before relieving them of their valuables. Legend has it one of her enemies bit off her ear, which sent her seeking victims in another part of town. After rounding up a gang, Sadie stole a boat and sailed the Hudson and Harlem rivers, robbing and kidnapping anyone in her path. Before she could be stopped, she retired back to the streets, made peace with her enemy, and wore her amputated ear on a necklace until she disappeared into history.

Your Next Pirate Adventure

Between the pages of history and besides the pirates of the Caribbean, America had her own pirate problems. Some did it for money, some for revenge, but surely they all did it for adventure. Visiting the coastal villages of Maine down to the Florida Keys is a great way to learn about these buccaneering men and women, but that’s not always possible. Thank goodness there are books. So the next time you’re in the mood for pirates, don’t forget to stretch the Code and find yourself an American pirating tale.

Reuse notice: Non-commercial users, feel free to print out “It’s Not Fiction: America’s Pirates” for personal use or give to friends, share online, or make a meme of, as long as you attribute and link back to this post. Commercial users, you may share a link to this post or quote a short excerpt from it with attribution and a link to this site, but you may not use this post in its entirety. Thank you for caring about copyright. 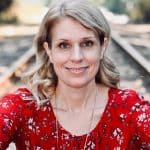 Danielle Thorne is the author of The Privateer of San Madrid, A Pirate at Pembroke, the Gentlemen of the Coast American series, and other Regency and modern romances. Her first book with Harlequin’s Love Inspired line released July 1st of 2020. Danielle is a graduate of BYU-Idaho and active in her church and community. Her free time is filled with books, movies, too much yardwork, and not enough sea cruises. She writes from south of Atlanta, where she lives with her sweetheart of thirty years, who is not a pirate, and two spoiled rescue cats who could be. Connect with Danielle on Facebook, Twitter, Instagram, or via her website.