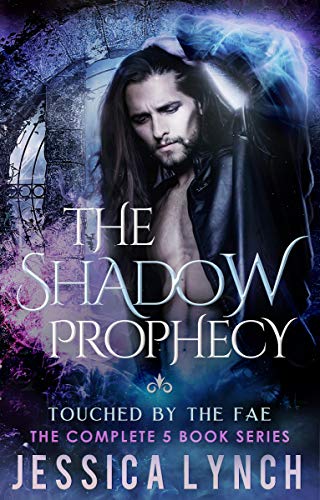 There once was a prophecy about a halfling fated to destroy the Fae Queen's reign . . . Too bad the half-fae, half-mortal woman spoken of in it doesn't know anything about the Shadow Prophecy. The fae, though? She knows all about them.

There once was a prophecy about a halfling fated to destroy the Fae Queen's reign . . .

Too bad the half-fae, half-mortal woman spoken of in it doesn't know thing about the Shadow Prophecy. But the fae? Courtesy of a mysterious mentor tasked with protecting her, Riley Thorne knows all about them.

Because the fae are real. She just pretends they're not.

The Shadow Prophecy is a collection that features the entire Touched by the Fae series:

Callie and Ash won’t let anyone get their hands on their baby. When it becomes obvious that the two of them alone won’t be enough to protect her, Ash sends his mate and child on a dangerous mission.

Because sometimes it takes a Dark Fae to get the job done. And, thank Oberon, Ash’s old acquaintance owes him a debt.

It’s time to call it in.

Due to a tragedy in her past, twenty-one-year-old Riley Thorne has spent the last six years as an in-patient at the Black Pine Facility for Wayward Juveniles. Her doctors try to convince her that there are no such thing as the fae. If it means she gets released sooner than later, she's okay with pretending.

Until Nine, the Shadow Man who once haunted her childhood, returns with another warning—plus a surprise.

There's a prophecy. And Riley is supposed to be the infamous Shadow fated to end the Fae Queen's Reign of the Damned.

Shadow (Touched by the Fae #2)
The fae are after me because I’m the Shadow. But what is that supposed to mean . . .

For six years, Riley has been held captive by the fae at Black Pine Facility for Wayward Juveniles—but when a brooding Dark Fae helps her escape, she’ll be drawn into a quest to discover the truth about her mysterious abilities and magical identity . . .

Touch (Touched by the Fae #3)
The prophecy is coming true. It's either the Fae Queen dies or I do—and, for the first time ever, I have something to live for . . .

Time is running out for Riley. After Nine sacrifices his freedom for the sake of his mate, Riley is determined to save the Dark Fae before she finally confronts Melisandre, the cruel Fae Queen whose curse has turned Nine into a frozen statue. But, in order to do that, Riley has to do one thing she swore she would never do.

She has to return to the asylum.

Zella (Touched by the Fae #4) || bonus epilogue
The Fae Queen is dead—and now it's time for me to finally live a little . . .

Weeks after the Fae Queen's death, Riley is trying to rebuild some kind of normal life in the human world with her Dark Fae mate. When Nine starts to grow distant, she wonders if he's beginning to think he made a mistake leaving Faerie behind to stay with her.