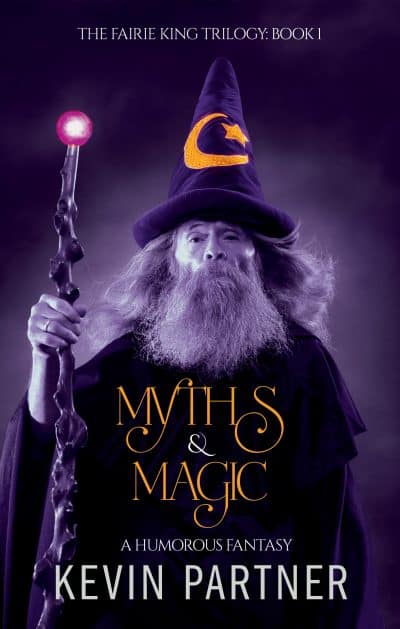 A fey king. An evil horde. A new darkness. And a man with exploding hands.

Where two worlds meet, the jealous eyes of a Faerie King peer from the darkness as he gathers a slave army of subjugation.

Set against him and his dark horde is Bill Strike, a naïve, girl-shy youth with exploding hands; the girl he’s shy of; three witches; and a pioneer of chicken-powered aviation. Oh, and a sadistic young noble with a grudge against the universe.

Myths & Magic is volume 1 of a humorous fantasy trilogy that features compelling characters, fantastical storylines, plot twists and a magical multiverse. And plenty of laughs.

If you enjoy the Discworld novels of Terry Pratchett, The Hitchhiker’s Guide to the Galaxy by Douglas Adams, or anything by Neil Gaiman, then you’ll love this new fantasy series.

“Fans of George Takei and Terry Pratchett will love this book and join me waiting impatiently for the next one. Go ahead, read it!”

“Couldn’t turn a page without a chuckle, a chortle or a good old fashioned guffaw!”

“This is an adventure story with bits of madness, magic, a budding bit of romance, and an air force wing of fighting chickens.”