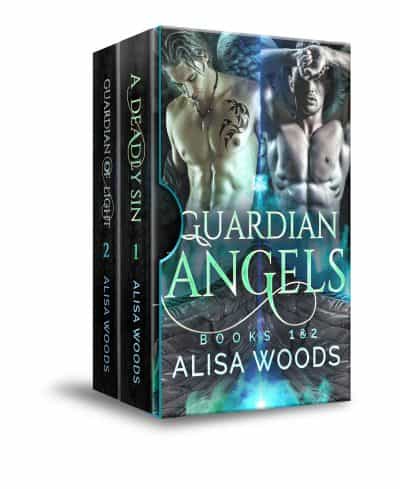 **2 Book Box Set** Tajael is a Guardian Angel protecting a beautiful physicist. Charlotte’s new theory might change the world . . . but the Fae want her dead before she discovers their realm. War brews around them, but the greatest danger may be the sweet promise of Love.

I am an angeling of the light, Protector class, assigned to Guardian Duty . . . and I am Tempted.

A war brews in the immortal realms, between the Angels of Light—created to love and protect humanity—and their ancient enemy, the Fae. The Fae have created a demon plague to stop the humans and their technology from invading the immortal realms. I’m tasked with protecting a beautiful scientist who may do exactly that . . . but this duty is fraught with danger. Not due to the demons who hunt her but because a Fall from Lust will plunge me into shadow. I’ve already been marked by the darkness of that realm—and I’ve vowed never to return.

My ex broke me in ways I didn’t even know I could break. But I’ve moved on and put the nightmares behind me. Now I have work to do, a theory to test, and a billionaire lined up to fund my experiments. If I’m successful, it will change the world. Everything’s finally coming together—then my co-worker attacks me, my hot neighbor saves me, and suddenly, I’m wondering if there’s more to my theories about an extra-dimensional world than I ever suspected . . .

Guardian of the Light
Oriel

I am an angeling of the light, born to love and protect . . .

Humans have breached the barrier between the mortal and immortal realms, threatening war between them, yet I’m sent to Guard one of the scientists helping to push their technology forward. An angeling’s place is not to question the angels, but I fear this might bring the End of Times. Not to mention that other Guardians have already fallen from the sin of Lust, and my charge is as beautiful as any in angelkind. But it’s her soul that draws me inexorably closer . . . for she’s broken, and it’s the kind of wound I was born to fix.

I’ve dropped everything do to secret science on an amazing project . . .

I was only sixteen when cancer stole my father. A few months later, my mom was taken by a car crash. I vowed to fulfill their dreams for me—to do great science like my father—and I’ve spent the last ten years of my life doing just that. Then Dr. Netherman invited me to join her secret project, and her transdimensional work is legit blowing my mind. Just like the hot personal bodyguard she has assigned. Now is not the time to break my No Dating rule, but Holy Hotness, does this guy have to be sweet and kind as well? I have to stay focused on my work . . . After all, we’re going to change the world.

In a war that threatens mortals and immortals alike, the Angels of Light vow to protect humanity . . .  but they will be tempted by the sweet promise of Love.

Get two books in this box set—A Deadly Sin, which is Tajael’s story, and Guardian of the Light, Oriel’s story—for a LIMITED TIME! Each book is a complete story with HEA. Fallen Angels is a follow-on series from the bestselling Fallen Immortals series. It contains sexy, hot angels of light—and shadow.